Lunch and Listen in Lawrenceville 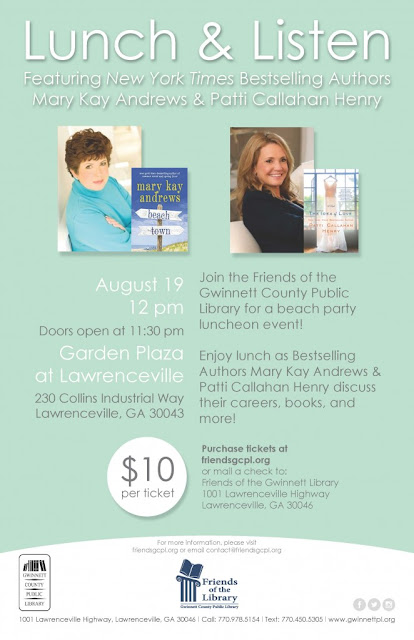 Posted by FOGLBlogger at 8:51 PM No comments:

FAYETTEVILLE, Ga. – (July 15, 2015) –  Seven Atlanta-area crime fiction writers are set to gather at the Fayette County Public Library on Saturday, July 25 at 1:00 p.m. for the “Atlanta Sisters in Crime Salon.” All published authors of various kinds of mystery, suspense, and thriller novels, the panel members will talk about their latest works, answer audience questions, and sell and sign books. Admission is free, and complimentary light refreshments will be served.
Stacy Allen is the author of “Expedition Indigo,” the first in a thriller series featuring Dr. Riley Cooper, a SCUBA-diving archaeologist. Currently serving as vice president of the Southeast Chapter of Mystery Writers of America, Allen is a certified Advanced Open Water Diver, with specialties in wreck diving and night diving. Her passion for adventure has taken her to over 60 countries.
Kathleen Delaney is the author of the Ellen McKenzie cozy mystery series. Set on California’s central coast, the five books have been praised by critics and loved by readers. Now she has a new series, the Mary McGill canine mysteries. The first in the series has been released in England to glowing reviews, and will be released in the United States August 1. A retired real estate broker and the mother of five grown children, Delaney now lives in Woodstock and writes (and reads) full-time.
Mary Anne Edwards is the author of the Charlie McClung series, traditional mysteries with a touch of romance. “Brilliant Disguise” and “A Good Girl,” the first two books in the series, were released last year. The third book, Criminal Kind, just came out last month. There will be seven more books in the series. A Texan by birth, Edwards now lives in Georgia with her husband of 34 years, having left the accounting world to write full-time.
Sharon Marchisello published her first novel, a suspenseful story of murder and Alzheimer’s titled “Going Home,” with Sunbury Press last year. Prior to that, she contributed the short story “The Ghost on Timber Way” to an anthology featuring Sisters in Crime members. She has also published a personal finance e-book, as well as numerous travel articles and corporate training manuals. Originally from Texas, Marchisello now lives in Peachtree City. Retired from a 27-year career with Delta Air Lines, she does volunteer work for the Fayette Humane Society.
Julia McDermott is the author of “Underwater,” a contemporary thriller set in Atlanta. It’s the story of Candace Morgan, a successful businesswoman who gets conned by her devious brother into funding a luxury home he promises to redo. When the housing market drops, the family plunges into a downward spiral of deceit and violence. She is currently at work on another thriller with tie-ins to “Underwater.” When not writing, she studies French, exercises, and stays busy as a wife and mother of four children.
Kerri Nelson is the author of the cozy Working Stiff Mysteries, with two titles in the series out so far. Nelson survived a 15-year career in the legal field and then took her passion for crime solving to the page, first taking a decade-long detour into the world of romance, where she penned 22 novels and novellas. An active member of both Sisters in Crime and International Thriller Writers, Nelson helps other authors achieve publication through mentoring and instruction, and works as a professional editor.
Fran Stewart is the author of seven cozy mystery books starring small-town Georgia librarian Biscuit McKee and her cat Marmalade, and the standalone mystery, “A Slaying Song Tonight.” Her new ScotShop Mystery Series begins with “A Wee Murder in My Shop,” featuring a modern-day Vermont shopkeeper and a 14th-century Scottish ghost. Stewart lives on the other side of Hog Mountain, northeast of Atlanta, and is a member of the National League of American Pen Women, Sisters in Crime, and Mystery Writers of America.
All seven authors are members of the Atlanta chapter of Sisters in Crime, an organization comprising 3600 members in 50 chapters worldwide, offering networking, advice and support to mystery authors. Sisters in Crime members are authors, readers, publishers, agents, booksellers and librarians, united by their affection for the mystery genre and their support of women who write mysteries. Sisters in Crime was founded by the author Sara Paretsky and a group of other women in 1986.
The event is free and open to the public. Proceeds from the sale of books at the Atlanta Sisters in Crime Salon benefit the Friends of the Fayette County Public Library, the nonprofit group whose sponsorship makes this event possible, along with many other library programs and services throughout the year.
Posted by FOGLBlogger at 8:36 PM No comments:

Contact us if you have any Friends Group needs or comments at Foglblog@gmail.com